In the wake of the Republican victory in the Senate and total control of Congress, my newsfeed has been overwhelmed with elated Conservatives and GOP loyalists who are reveling in how our newest political heroes will save our great nation from the “Liberal Agenda.”

At last, brothers and sisters, we will be free from the oppression brought down upon us by poor immigrant families who have come here to steal our jobs! At last! The persecuted Christian majority will be saved from “the gays” and the horrors of marriage equality! Women will no longer be forced into unwanted abortions by liberal doctors! And we can finally end the evil social-welfare programs, because, obviously, children who are born into a shitty, hopeless situation through no fault of their own should definitely starve to death for the crime of being poor.

Or something to that effect.

Now, on to the potheads! Oregon, Alaska and Washington D.C. joined Colorado and Washington State yesterday in legalizing recreational cannabis. But with this strong Republican majority in the House and Senate, along with our Democratic President – who has certainly been no friend to personal freedom where marijuana is concerned – I would be slightly concerned for the pot-growers in the newly “legalized” states. It may just be a matter of time before the soldiers from the DEA step up their efforts to shut down legal grow operations. Or perhaps, if we’re lucky, the Politicians will all come to their senses when they see the millions of dollars in tax revenue that legal weed has brought in to Washington and Colorado. Because if there’s one thing that politicians on both sides of the aisle love, it’s a steady stream of tax-generated revenue.

Which brings me back to my newsfeed and the endless stories about this election being a win for “True Conservatism.” I’m sorry to break this to you, friends, but it’s just not the case. You see, when you support the causes of the modern GOP, you aren’t supporting conservative ideas at all. You are simply supporting another form of big government – in many cases bigger government – with a slightly different agenda.

I should point out, while we’re at it, that the Democratic Party doesn’t represent true liberalism either. They’ve become a bunch of perpetually-offended word-police who are unbelievably vocal when someone utters an “outlawed” mouth-noise but are almost completely silent when it comes to the anti-war, core principals of Liberalism. I guess war is okay as long as the Commander-in-Chief waging it happens to be on your political “team.” But this has already been discussed in another essay on this site.

I suppose it’s the hypocrisy that bothers me – otherwise intelligent friends who are just so excited about kicking these “freeloaders” off of welfare while not batting an eye at the billions of dollars thrown at dozens of other Republican pet projects.

And I’m sorry, but in the end, if you get mad about feeding poor people with tax-payer dollars but are just fucking fine with spending many, many more tax dollars to provide corporate welfare to billionaires, lock people in cages for victimless crimes and drop bombs on brown children in foreign countries, then you aren’t a conservative. You’re just an asshole.

Author: Nick Allison is just a banged-up Army Infantry vet of the War in Iraq who isn’t a fan of political parties. Or politicians in general. He lives in Austin, TX with his wife, their children and two big, dumb, ugly mongrel dogs. Don’t take anything he says too seriously… he’s just trying to figure out this ride we call existence like everyone else. Also, he enjoys writing his own bio in third-person because it probably makes him feel more important. 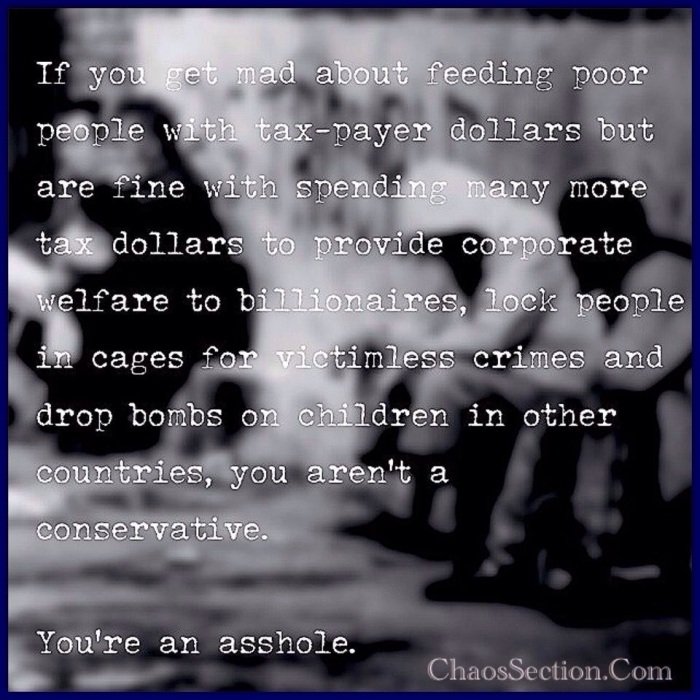 One thought on “You aren’t a Conservative. You’re just an Asshole.”