“The legalization of marijuana is not a dangerous experiment – the prohibition is the experiment, and it has failed dramatically, with millions of victims all around the world.”
– Sebastian Marincolo

Once upon a time, there was a land inhabited by intelligent creatures called Apes. They called their land a Nation. And this Nation was a strange, strange place. It was a good place, compared to a lot of other places, but strange nonetheless. The Apes loved to make rules for themselves. Some of the rules were good and made a lot of sense. “Don’t kill other apes!” said the Apes, “Don’t steal from them! Don’t discriminate based on species! Don’t become intoxicated and drive a car!” These rules were not a problem, most everyone agreed.

But the Apes didn’t stop there. They also loved to make silly rules that didn’t make any sense – I should explain how the Apes made the rules. You see, they didn’t actually make the rules themselves – they picked a few select Apes to make the rules for them. They called these special rule-makers Politicians. Every few years the Apes would get together and decide who the Politicians would be. They did not often pick new Politicians though, because the Apes found it easier to just pick the same Politicians, time and time again, even if these Politicians weren’t doing a very good job – and were making very shitty rules.

Once the Apes were finished picking (or reaffirming) their Politicians, the Politicians would meet up in a dark, corrupt village known as The District of Columbia. The District was filled with another special group of Apes called Lobbyists. But unlike the Politicians, these Lobbyists weren’t elected – they were hired. The Lobbyists had control of vast amounts of colorful bits of paper that they called Dollars. The Apes loved Dollars because they were supposed to represent a type of metal called Gold – and Gold was shiny. Politicians loved Dollars most of all and when they travelled to The District to make the rules, the Lobbyists would come to them and say, “Here are some Dollars for you. When you retire, we will give you a job and give you even more Dollars! Now, all you have to do is make the rules the way we want them.”

And this is how the Apes made rules. I know, it doesn’t make any sense to you, but there was much about the Apes that didn’t make sense.

One of the silly rules that the Apes made was to make certain plants that grew naturally on the Earth illegal. One such plant was called Cannabis, but most Apes called in Marijuana, Pot or Weed. Something else you should know about the Apes is that they liked to change their perception of reality because their daily lives were very stressful, difficult or boring. How the Apes did this was by ingesting certain plants or chemicals. Cannabis was one of these plants – probably the best one.

The funny thing about this rule though, is that the Cannabis wasn’t really dangerous. It didn’t kill anyone – sure, it was possible to ingest too much Cannabis and drive a car – but as I pointed out earlier, the Apes already had a rule against driving cars while intoxicated. But the Cannabis itself didn’t kill anyone. And the Apes certainly weren’t diametrically opposed to all intoxicants. No, this was not the case at all! As I said, the Apes loved to change their perception of reality. They collectively drank gallons upon gallons of an intoxicant called Booze, every day. Everyone was okay with the Booze and no rules were made to keep them from drinking it. Perhaps then, it was the smoke that scared the Apes. You see, the most common way of consuming Cannabis was by lighting it on fire and breathing the smoke. But no, this wasn’t the issue either. Because the Apes regularly consumed another plant – this one was called Tobacco – that they mixed with chemicals and smoked. Tobacco was different from Booze or Cannabis though, in that it didn’t really have any benefits. It just made you become addicted and eventually killed you with diseases like cancer and emphysema. The Booze, while it did have the benefit of changing the Apes perceptions and making things really fun, it also killed them – and sometimes caused them to make very poor decisions while they were drinking it. In fact, the Booze and the Tobacco killed millions of Apes every year… while the Cannabis killed none. And yet Booze and Tobacco were allowed while Cannabis remained “against the rules.”

But it gets worse – and this part isn’t silly at all. This is what the Apes did to the other Apes who dared to break the Cannabis Rule: They locked them in cages. Some of the cages were owned by Private Companies and these Private Prison Companies paid their Lobbyists many, many Dollars. The Lobbyists in turn promised the Politicians many, many Dollars as well, so long as they didn’t change the Cannabis Rule. Most of the Apes didn’t pay any attention to this and this is why Cannabis continued to be illegal. Because it was very, very profitable for the Private Prison Companies to put the Apes who broke the silly rule in the cages that they owned. Of course, it wasn’t just the Prison Companies that wanted to keep Cannabis illegal. The Booze Companies (who were allowed to sell their liquid intoxicant) also made money from the Rule against Cannabis use. As did the paper and cotton companies. Because you see, Hemp was also against the rules, even though it wasn’t psychoactive like the Cannabis that the Apes smoked. It could be used to make many textiles. It was stronger than paper and cotton and cheaper to manufacture. It was more quickly renewable than the trees that the Logging and Construction Companies cut down for lumber. It was a viable solution. And so of course the Big Private Companies just couldn’t allow this kind of competition.

The Politicians hired some of the common Apes to enforce the rules. They called these Apes The Police. They gave them weapons and shiny badges and told them that their job was to protect the other common Apes… and enforce the rules. And of course, one of the rules was to arrest the other Apes that they caught with Cannabis. And lock them in cages, even though their actions weren’t harming anybody else. 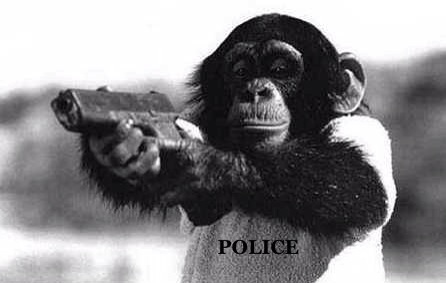 The Politicians and The Police didn’t call the Cannabis Cannabis though… they called it “Drugs.” This Nation of Apes was obsessed with words. They were offended by certain words. They were angered by certain words. They demonized certain words. And even though the words were nothing more than noises they made with their mouths, the Apes attached a lot of power to these words. And this is why The Lobbyists and The Politicians called the Cannabis “Drugs.” The common Apes had decided that the word Drugs was a very negative word. And it covered everything: Heroin, Crack, Crank, Coke, Meth and yes, even Cannabis. The Politicians launched an all out war on drugs. That is what they called it – The War on Drugs! As if you could fight a war against inanimate objects. But the War on Drugs wasn’t really against the Drugs. It was against other Apes. And it was very real war indeed. Many thousands of the Apes died. They died in their Nation. They died in the Nation to the South. They died in Nations on the other side of the Earth. All to keep the Drugs – and the Cannabis – illegal.

Of course, the Apes fought many wars with other Apes over many different issues, but those stories are for another day. Today we are talking about the Cannabis Wars. Cannabis. A harmless plant that a Nation of Apes collectively freaked out over. And to top it all off, this plant was not only harmless, it was actually very helpful. The Apes didn’t have a Drug Problem. They had an Education Problem. Aside from hundreds of effective and inexpensive medicinal issues, this plant was also very effective at producing the empathy, compassion and vision that these Apes longed for. Or as one very intelligent Ape, a scientist named Carl, put it: “The illegality of cannabis is outrageous, an impediment to full utilization of a drug which helps produce the serenity and insight, sensitivity and fellowship so desperately needed in this increasingly mad and dangerous world.”

As I told you, this Nation of Apes, at its core, was a very good nation indeed. The Apes that populated it were, for the most part, very good Apes with big hearts. They gave to charities. They supported their families. They loved and laughed and hoped and trusted. And this was their downfall. The Trust. They trusted too much. They trusted the Politicians simply because they were in positions of power. They were easily led astray. And they never realized that they – the Common Apes – were the ones with the power. They had become so accustomed to electing the same crooked Apes – from the same Political Clubs – to the same Political Positions, decade after decade, that they forgot that they were the ones indirectly responsible for the bad Rules and the Wars and the Cages. The authority of the Politicians was only as meaningful to the degree that the common Apes collectively agreed it was. They could have written new rules. Rules to kick the Lobbyists out of The District. Rules to let the non-violent Apes out of the Cages. Rules that allowed them to do as they wished on an individual level so long as their actions didn’t harm their fellow Apes. Rules for how long a Politician could hold office before becoming just a regular Ape again.

They could have fixed the whole goddamn broken system any time they wanted. If only they had decided to do it. 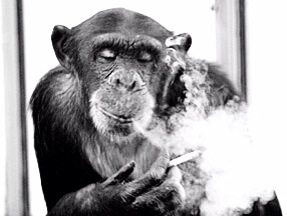 Author: Nick Allison is just a banged-up Army Infantry vet of the War in Iraq. He lives in Austin, TX with his wife, their children and two big, dumb, ugly mongrel dogs. Don’t take anything he says too seriously… he’s just trying to figure out this ride we call existence like everyone else. Also, he enjoys writing his own bio in third-person because it probably makes him feel more important.

One thought on “A Nation of Apes and their Silly War on Cannabis: An American Fable”