Each year on September 11th – or the anniversary of any other tragic event – my Facebook feed becomes decidedly more religious as family members and friends send prayers and make pleas to an omnipotent being in the sky. God bless America. Pray for the victims and their families.

I’m not attempting to make light of a tragedy that has affected our generation more than any other single event. 9/11 certainly changed my own trajectory in life. And if people need to pray to the heavens and double-down on their faith to help them deal with that tragic Tuesday morning, so be it. I wouldn’t begrudge anyone some much-needed comfort in this crazy era of 24-hour “news” stations and never-ending war. But from a philosophical perspective, I can’t help but wonder if people actually believe there is an all-powerful force looking out for everyone or if they are intentionally (or maybe subconsciously) allowing themselves to be convinced of such a deity? That’s not a rhetorical question. I’m genuinely fascinated by the idea.

I was fairly religious at one point in my life and even briefly flirted with the idea of attending seminary school. Thankfully my parents – who attended a Methodist church for a while when I was young but were never particularly devout – instilled in me the ability to think critically, and as I grew up, reason slowly began to overtake faith. The last vestiges of a personal protector god were stripped away when I was 21-years-old, sitting at Fort Benning, GA, a future Infantryman waiting to begin basic training. My religion crumbled along with the Twin Towers that morning – and with the subsequent wars we fought in Afghanistan and Iraq. I could no longer keep up the facade of faith in the face of so much senseless death and destruction. Perhaps there is some sort of intelligent force that created the universe. I certainly can’t prove that there isn’t. But, at least for me, it’s a monumental stretch to say that It takes a personal interest in our well-being.

Saying “God bless America” and “pray for the victims” is nice and all – and I suppose it can make a certain type of person feel all warm and fuzzy inside – but one has to wonder how it is that an omnipotent being can’t control jetliners… or why an omnibenevolent one would choose not to.

Who knows. Just my thoughts. And while I don’t pray for a better future, I certainly hope that some day the human race will finally learn to settle our petty differences with conversation, reasoning, and understanding rather than bombs, bullets and, suicide attacks. Whishful thinking? Probably. But I guess everybody needs something to hold on to.

Author: Nick Allison is just a banged-up Army Infantry vet of the War in Iraq. He lives in Austin, TX with his wife, their children and two big, dumb, ugly mongrel dogs. Don’t take anything he says too seriously… he’s just trying to figure out this ride we call existence like everyone else. Also, he enjoys writing his own bio in third-person because it probably makes him feel more important. 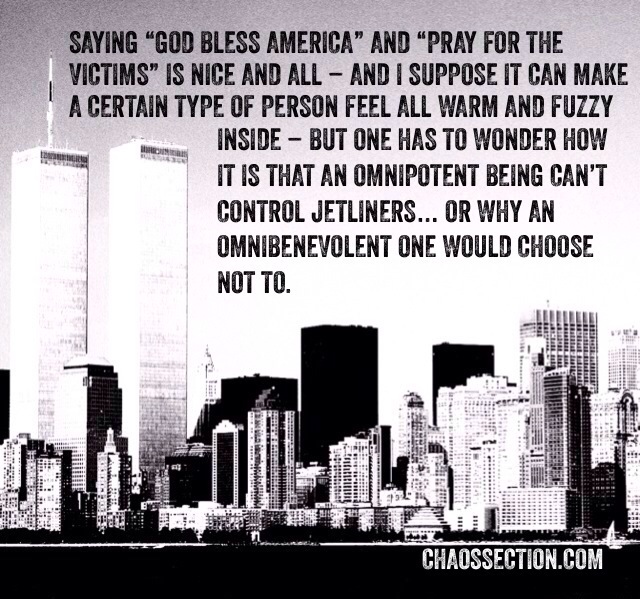 2 thoughts on “Losing My Religion: Thoughts on God, Tragedy and Belief”