It’s been several years since I have seen my father. He doesn’t live far, mind you–only six states south of me in the sultry country just outside of Savannah, GA. Gregory Nicholas Tarana has been my father for almost forty-two years; sadly, while we both love each other a great deal, falling out of touch is something we just seem to do every few years. I guess you could say, “It’s our thing.”

I have always blamed these sporadic falling-outs on the fact that my dad is a born again Christian, a very strong believer in Jesus Christ and the Bible, while I have chosen to walk a much more godless path as a pantheist, with an absolute zero belief that the Bible is “the word of God.” Over the last several months, I have come to the realization that blaming all my issues with my father on a guy I have never met and who lived approximately 2,000 years ago has been the easy way out. At forty-one, I have finally decided to put on my “big girl” pants and not only examine our relationship, but also take ownership of my stake in it.

I will be the first to admit that when I came out as atheist, I was extremely vocal–sometimes too vocal for my own good. I was not holding back one iota when it came to my disdain for dogma. There were times that I was an insensitive douche, and one of the things I have learned is that sometimes on the road to finding out who you are in this world, you confuse asserting your beliefs with trampling on the beliefs of others. What I thought I was doing was telling the world who I was, when in fact it sounded like I was telling everyone else that they were assholes. I have made this mistake too many times.

Lately, I have been thinking a lot about something my friend Micah said last October while we were having a discussion about war. I was being very hard on the American public for seeming like they did not give a shit about dead soldiers, when Micah turned to me very zen-like and said, “We are all on our own journey. We didn’t always know what we know now and what we have to do is educate.” I was immediately struck by his level of consciousness, and while my own edges are still very rough I am trying my best to soften them, even if just a bit. But let me tell you, it’s been a struggle.

Before I had all of these “epiphanies” about my own shortcomings and how “finding myself” did not necessarily mean I had to hurt others in the process, I wrote a very scathing essay about my dad called, “Two Faced Jesus.” It was a brutal account of my dad’s path to Christ from my perspective, and while I continue to stand by the honest approach I took when writing that piece, I have come to realize that the depiction of those events came from a very hurt, angry little girl who felt betrayed by her dad.

Months after the piece was published I received a text from our editor Nick Allison, saying that I may want to check out the comments under my essay.  Apparently, my dad had found the piece on an atheist parenting website and through that found us, The Chaos Section. As I read his LONG comment my heart sank; I knew it was a hurtful piece of writing because it was meant to be.

Nick asked me if I wanted to take the essay down, and it was the only time I had ever considered doing such a thing; but my final decision was to leave it up. My philosophy about writing is this: when you are putting something out there that is very personal, there is always the chance that, down the road, you may change your perspective and your views may shift. That does not mean you should not honor the work. Life, unfortunately, is messy, and it can’t be edited.

It was only after hurting my father that I began to understand that I had an equal responsibility in our relationship and how it was going to play out. I am no longer the rebellious teenager with the eccentric father who talks out loud to Jesus. I am a grown woman who is a by-product of that man, and I am only now beginning to see just how much like him I actually am.

There were times that I interpreted my dad’s voicing of his beliefs and opinions as an act of aggression against my own. I have finally recognized that it’s been me with the problem all along, not my dad. If I want to have him in my life, I need to learn how not to wage a full-on war against his beliefs, but rather learn to accept his truth and the path that he has chosen to walk.

With forty-two just around the corner, I have been calling forty-one my “Mending Fences Tour.” It’s the year that I finally stopped being angry with the people I love. I have spent a good portion of my adult life writing people off, and my father has been on the receiving end of that letter on more than one occasion. I am by no means saying he is perfect–he’d be the first to admit that he isn’t–but he certainly did not deserve the wrath that I have bestowed on him at times. 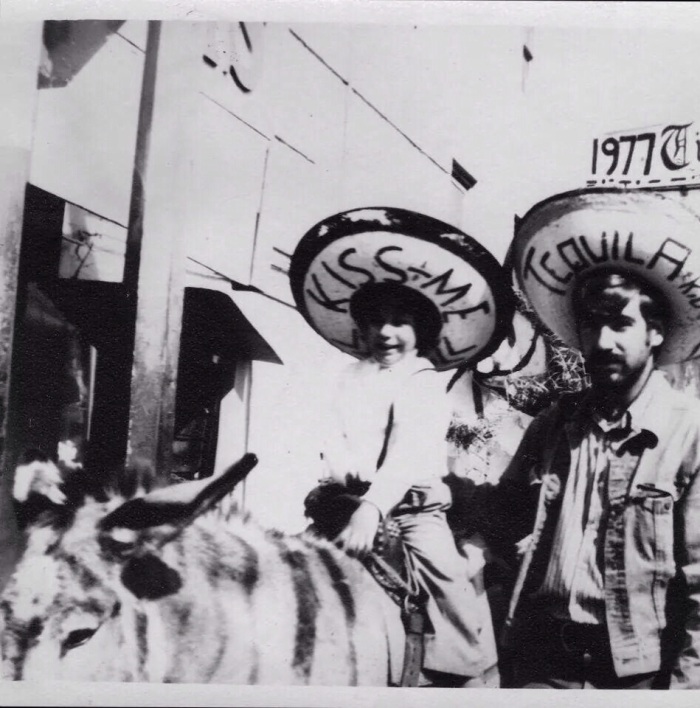 I have spent too much time harping on the moments my father missed and not enough time appreciating him for all the things he was there for. He may have not been around for my first day of school or even my high school graduation, but he was there to show me how to cast a fishing rod and bump start a car on the side of the Taconic Parkway. He even seemed to magically appear every time I was up to no good, whether it was to catch me smoking in front of the movie theater on Main Street or spot me walking home from the movies holding hands with my boyfriend, Peter. Those things counted too, and my dad was there for them.

Even when we weren’t speaking I always knew that if I ever needed my father, he’d be there for me. My dad has always ended every conversation by telling me he loves me, and I shudder to think of how I would feel if something had happened to him before I had the chance to do the same. He may not be the easiest person for me to understand, but never for one moment have I doubted his love for me. And when I look back on all the other shit, isn’t that really the only thing that matters?

One thought on “Daddy Issues”