“The Hall of Fame is for baseball people. Heaven is for good people.” ~ Journeyman outfielder Jim Dwyer, 1989

An annual rite of winter is upon us and it has once again stirred up controversy, all manmade. Some people know it as the announcement of the latest players to make it to baseball’s Hall of Fame. I refer to it as Hypocrisy. The Name Is Baseball Writers Association Of America.

The controversy has nothing to do with the three players who gained entry into this supposed hallowed hall. Greg Maddux, Tom Glavine and Frank Thomas are that trio, and fine ballplayers they were.

No, the controversy has to do with the players left out. Among them is Craig Alan Biggio, who just fell shy of being named on a minimum of 75% of the 571 ballots by two votes. What I haven’t heard one person say is anything about the 39 extra votes Biggio received this year compared to his tally in 2013, his first year of eligibility.

I say that because my first guess would have been Biggio had a bang-up 2013 season, maybe popping 20+ homers for the ninth time in his career, adding to his 414 career steals, garnering an eighth All-Star appearance or fifth Gold Glove. But he did none of those things; in fact, Biggio never played a major league game in 2013, which has me very suspect of the rise in his vote total.

Granted, I won’t go so far as to suggest bribery, extortion or providing payola to any of the esteemed members of the BBWAA. Lord knows that outfit is above reproach, but something definitely has the distinct smell of fish in this latest MLB development. 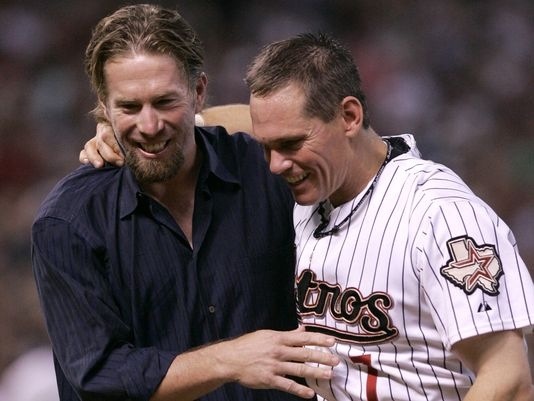 Biggio’s Exclusion Called “A Travesty” & “Criminal”
Nor am I the only one picking up on that odor. A quick trip around the internet after today’s announcement had me reading a lot of negative things being said about the Hall of Fame announcement. All the talk seemed to be pointed towards players whose vote totals decreased from last year to today – names such as Barry Bonds, Roger Clemens and Sammy Sosa. But that seems an easy call since neither Bonds nor Sosa hit a homer last season, and Clemens didn’t strike out one single batter.

I joke, of course. Something that is easy to do when one does not give a shit about how the BBWAA conducts its affairs nor who winds up with a plaque at that little baseball memorabilia museum in Cooperstown. I used to care a lot – had a trip on my bucket list until the late 1990s – but I don’t have any desire to go there now.

One of the first things you need to know about the BBWAA is the group consists of human beings who are just as fallible as you and me. Also, there aren’t a lot of rigid rules for how to select certain baseball players, other than when their names first get on the ballot and upon how many ballots they get to appear.

Criteria voters are supposed to consider are “the player’s record, playing ability, integrity, sportsmanship, character, and contributions to the team(s) on which the player played,” according to the National Baseball Hall of Fame’s website. There are certainly players of questionable character and integrity that have been voted in, but then, baseball – the game on the field, the business, the politics, the television and the reporting – has always been dirty.

No Player EVER With 100% Of Vote
It’s too bad that integrity and character aren’t required by 100% of the voters. Still, the one damning statistic for me regarding the BBWAA is that no player has ever received 100% of the vote. I know, I know, it’s difficult to get everyone to agree on anything.

And yet no ideas come to my mind as to how any true devotee to the game wouldn’t vote for Babe Ruth. The Bambino actually got fewer votes in the initial HOF class than Ty Cobb. You remember Cobb, that lover of all humanity regardless of their skin color? While we’re on the subject, the first black to get in? Jackie Robinson just scraped by in 1962 at 77.5% (36 of the 160 voters didn’t think enough of his baseball record, or maybe his character).

It took Joe DiMaggio three tries to get in, so if Biggio makes it in 2015, the great Astros second sacker will be in good company. Joltin’ Joe must have been into some serious payoffs from 1953 to 1955 when his vote totals rose from 44.3% to 88.8%. What did he do in those two years off the diamond that finally convinced more than twice as many voters?

By the way, I’m a huge Craig Biggio fan – something probably best stated earlier. It was my extreme privilege to have followed him along his career, starting with his days at Seton Hall where he was once part of the same batting order with Mo Vaughan and John Valentin. If Biggio gets in next year, I will be happy for him and my beloved Astros – but at the same time, I’ll be a little sad for my game.

Author: A crotchety old man since his birth during Gen. Eisenhower’s first term as US president, Willie B. Lakey resides in the bee-yoo-tiful Texas Hill Country along with his wife, too many cats and his beloved beer fridge. Employed as an overworked and underpaid freelance sportswriter, his few moments of happiness usually come when communing with critters, tending his garden or sippin’ cold beer and enjoying tunes at Gruene Hall.