During our early religious indoctrination, most of us were told stories from the bible about Satan. He was an evil, demon-man, a fallen angel, lording over the under-world of Hell while causing mischief in the upper-world and patiently awaiting any sinners, back-sliders and non-believers so he could torture their souls forever and ever when they died. And God, being omnipotent and all, was apparently cool with all this. Many of us eventually started to question the validity of this fantastical tale – at roughly the same time we realized a giant rabbit wasn’t hiding eggs in the night and our chimneys were much too small to accommodate the substantial girth of the creepy fat man in red whose lap we sat on at the mall each December. The Devil became nothing more than a fairy tale, an invention of an ancient ruling class used to frighten ignorant, superstitious peasants into submission. Or something to that effect.

Of course, others decided to play it safe and keep buying into the religion that they happened to be born in to. But, being mature adults and all, decided to take the character of Satan as a metaphor for evil and not an actual being.

Then there are the hardcore-fundamentalist-fire-and-brimstone-the-bible-must-be-taken-literally brand of adults. To them, Satan is very real… even if they gave up on the whole Santa Claus thing.

And if a handful of fundamentalist Christians wants to believe that there’s a scary, demonic, supernatural man with horns running around the world – or wherever it is they believe he’s running around – snatching up souls, I suppose it’s not that surprising. But when a Supreme Court Justice believes it literally, we may have a serious problem on our hands.

The Supreme Court of The United States has two fundamental functions: 1) to interpret and expound on all congressional enactments brought before it in cases and 2) to examine federal and state statutes and executive actions to determine whether they conform to the U.S. Constitution.

Its power supersedes that of all other courts in the nation. Those 9 justices interpret the laws that affect all of us… Pretty important stuff, right?

In a recent interview with New York Magazine, the longest-serving member of the Supreme Court, Antonin Scalia (thanks, Ron), talked openly about his disdain for “liberal” media, his hatred of the State of the Union address, his thoughts on atheists, his devotion to the Pope and the Catholic Church, what he watches on TV, his stance on gay rights and several other issues.

He also mentioned that he believes “The Devil” is a very real person.

Senior: Can we talk about your drafting process—
Scalia: [Leans in, stage-whispers.] I even believe in the Devil.

You do?
Of course! Yeah, he’s a real person. Hey, c’mon, that’s standard Catholic doctrine! Every Catholic believes that.

Every Catholic believes this? There’s a wide variety of Catholics out there…
If you are faithful to Catholic dogma, that is certainly a large part of it.

Have you seen evidence of the Devil lately?
You know, it is curious. In the Gospels, the Devil is doing all sorts of things. He’s making pigs run off cliffs, he’s possessing people and whatnot. And that doesn’t happen very much anymore.

No.
It’s because he’s smart.

So what’s he doing now?
What he’s doing now is getting people not to believe in him or in God. He’s much more successful that way.

That has really painful implications for atheists. Are you sure that’s the ­Devil’s work?
I didn’t say atheists are the Devil’s work.

Right.
What happened to him?

I hope you weren’t sensing contempt from me. It wasn’t your belief that surprised me so much as how boldly you expressed it.
I was offended by that. I really was.

Well… okay then. This conversation would be amusing if it weren’t for the frightening implications. Don’t get me wrong, I support everyone’s choice to believe in whatever supernatural stories they want. But we are talking about a member of the highest court in the land, a person who is supposed to be revered and trusted for his knowledge, critical thinking skills, judgement and intelligence.

Do I think Justice Scalia is a dumbass? No… Although I often disagree with him politically (and apparently rationally and philosophically), he otherwise seems to be a fairly intelligent man. But the devil? Seriously? I expect that kind of thing when one is talking about the Governor of Texas, but it’s troubling when it’s coming from an Associate Justice.

How can rational people trust the decision-making abilities of a 77-year-old man who still literally believes that a “demon” from the pits of “Hell” is actually real and not just a story, a metaphor from an ancient collection of books? After all, this is 2013. We carry the entirety of everything that is currently known to man in the front pocket of our Levi’s and-

Time out. I just thought about something that the Justice said: “Are you so out of touch with most of America, most of which believes in the Devil?”

Most of America? I want to believe that that’s not true, but I don’t have a very good feeling about this. Please excuse me while I google a few polls….

Okay. On second thought, perhaps I’m being too hard on Justice Scalia. He’s just an old guy who believes in some silly shit, who only has the power to impact a few laws and regulations. That’s not that frightening, I suppose.

And it turns out he’s correct – he’s not alone in his silly beliefs. Far from it. I just read several polls which determined that something like 50-60 percent of Americans believe that the “Devil” exists (of course, I’m not sure who the fuck actually answers polls, but let’s go with it). That’s not just a handful. That’s roughly 160 million people who literally believe that there is an invisible, horned demon-man doing battle with God, attempting to destroy the Earth and enslave all of mankind. And these people have access to firearms and 3,000 pound tank-like SUVs… while vehemently insisting that their way is the only way… and that their death will lead only to eternal bliss and salvation… now that is fucking scary.

Author: Nick Allison is just a banged-up combat infantry veteran of the War in Iraq. He lives in Austin, TX with his wife, their children and two big, dumb, ugly mongrel dogs. 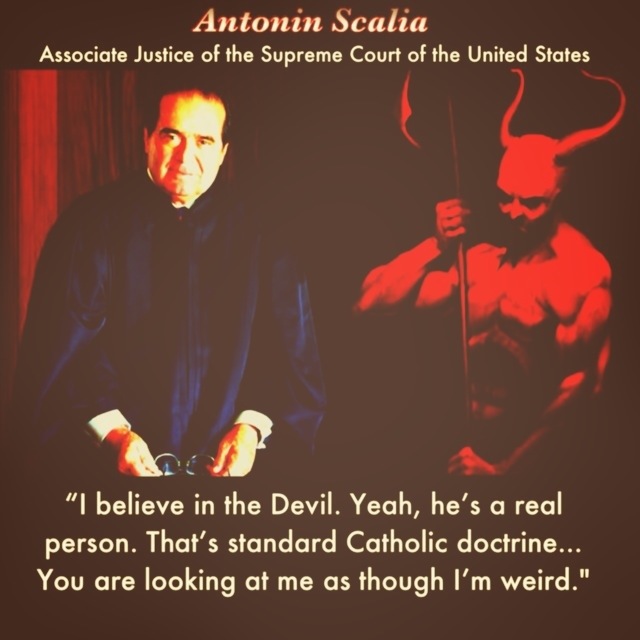 2 thoughts on “The Devil and Justice Scalia”