I’ve always been baffled by parents who say, “Don’t hit your sister!” then drive home their point with a swift smack to the kid’s head. I’ve seen this scenario played out countless times in department stores and restaurants and it always ends with me rubbing my head along with the teary eyed child. Now, this is America. The birthplace of the drive through liquor store, Olestra and the subprime mortgage so I understand our love affair with stupid. There’s just something about hitting someone to teach them not to hit that seems extra stupid.

However counterproductive this method is, It’s one thing if it’s used on a kid. If these kids share the same genes as their parents, the sooner they get used to being hit in the head, the better. When used on a country, however, this extra stupid method enrages me. How do you announce the decision to bomb someone in retaliation for a chemical attack without turning around to your advisers to ask, “Wait…what are we doing?” How has this unbelievably dumb strategy become the go-to tactic in the event of foreign conflict? Are we so bereft of ideas, we just turn and strike without thinking things through? Have we finally devolved into a Walmart mom? Don’t hit your sister, Syria.

And while Syria is hitting her sister, North Korea is busy shooting all his cousins because he ran out of siblings to kill. If this is an effort to spare people from suffering and drive home a message, perhaps we should do it in a place where the trees are stripped bare because people are eating bark to avoid starvation. I mean, I don’t want to tell anyone how to do their job but if I had an inkling there were people living in a modern day Nazi Germany, I may make that a priority. If our involvement in Syria trumps intervention in N. Korea, I suspect it isn’t really about saving people. Maybe the humanitarian movement should work on discovering oil in places people are being systematically tortured and murdered. Maybe that’ll get some boots on the ground where we can cut down on the atrocities, like a sort of war bonus. “Hey Jeb, I have an idea. You guard the new pipeline, I’ll run over there and shoot the men raping that girl before one of them lops off her head. Then we’ll have a nice lunch.” Sort of a two birds with one stone approach. I wish I believed this was a noble effort. But it doesn’t smell like a humanitarian endeavor. This smells like a plan to bomb a few oil fields and then toss a few billion dollars in no bid contracts to a select group of contractors on our dime. This all seems terribly familiar but I might be thinking of a Bill Pullman movie.

So here we are, in Walmart. Watching and wincing as we witness someone’s poor disciplinary method reinforce the very behavior they want to end. If Obama decides to intervene in the Syrian conflict, it will be confirmation of something I’ve suspected for quite some time now. They are all the same. Presidents, not men. Welcome to America Inc. where we don’t elect presidents, we elect CEO’s. Countries are corporations and we’re just lowly consumers. We consume their product and get fatter and dumber and riddled with tumors while they get richer and invent newer and better chemicals to feed us. I think it’s time I go organic. I should have done it the day Obama appointed Michael Taylor to Deputy Commissioner for Foods but I figured, well…maybe we’re just being punked. We weren’t. He was completely serious. Ashton Kutcher never showed up. He was busy making a shockingly articulate speech at the Kids Choice Awards while the man I voted for did a heartbreaking yet impressive impersonation of Bush Deux. And since you asked, no, I don’t miss him yet, but I do miss Will Ferrell. He really nailed it. Maybe what I’m really missing is the humor in this situation. Maybe the irony of a man who was elected on the promise of ending a war starting a new one is just too bitter. Maybe one day I’ll be able to look back and laugh, but I know Will Ferrell… and you, Mr. President, are no Will Ferrell.

Author: Rachel Zimmermann is a 43 year old dependent with a fair amount of artistic ability and lots of spare time. She currently resides on Long Island with her husband and two children. 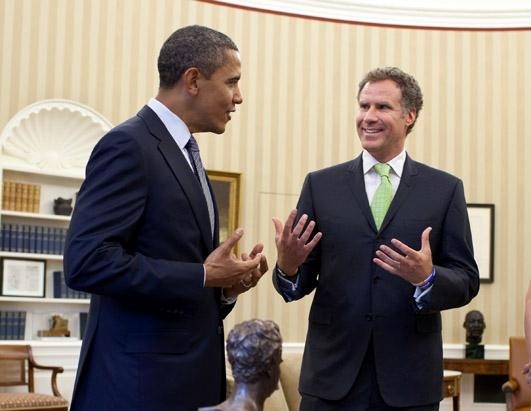 One thought on “Will Ferrell Indignation”