I have been an avid Rolling Stone reader for most of my life, and there was a time, prior to the internet, that I was even a full-fledged subscriber to the magazine. Granted, it mysteriously showed up in my mailbox for free every week for years on end, but that still counts and I read it, more often than not cover to cover. Much like those people who enjoy Playboy for “the articles,” I much prefer Rolling Stone for its journalistic bite rather than for its musical reviews (although reading a good band review from time to time never hurt anybody).

When the economic bubble burst, Rolling Stone magazine was putting out some of the best articles written about the collapse, and Rolling Stone blogger Matt Taibbi was making quite a name for himself with some of the finest work of his career. In fact, he was so good that he not only made “derivatives” and “credit default swaps” something my feeble mind could actually understand, he also made the subject matter sexy and interesting. So it was no surprise to me that when the most powerful man in the military under the commander-in-chief was taken down, it wasn’t by some hotshot DC journalist—no sir, it was by a Rolling Stone contributor. The guy who brought McChrystal to his knees was a scruffy, young, passionate journalist named Michael Hastings. Did I forget to mention he was also wicked smart?

These writers are throwbacks to my all-time favorite Rolling Stone contributor, Hunter S. Thompson. Thompson’s career at Rolling Stone spanned thirty-four years, and I once said that reading his writing was like going full-speed on a motorcycle minus a helmet. You knew it was dangerous, but you just didn’t care; it felt that good. While most everyone knows Fear and Loathing in Las Vegas, I’ll go with Fear and Loathing on the Campaign Trail all day, every day. When you can take something as unsexy as a campaign, an economic collapse and yes, even a war strategy, and make them both appealing and compelling to the average person—well, that’s good writing, and Rolling Stone has attracted some of the best writers of its time.

I remember reading the McChrystal article when it came out, and for some reason I have a vivid picture in my head of a Mad Magazine cartoonish image of him accompanying the original article. I can’t find any proof that such a picture ever existed, so it’s likely something my imagination created in response to the article. At the time, I was following the war very closely, mostly because in ‘08 I was a rabid Obama supporter and believed he had a clear and concise plan for winning in Afghanistan that would get our men and women home sooner, rather than later. It was somewhere around 2010 that I began to realize Obama didn’t have a fucking clue and this war was not going anywhere. Hastings’ piece not only exacerbated that realization, I guess you could say it was the final nail in the coffin that ended my love affair with Obama.

Hastings’ article created a lot of buzz, yet what most people took away from it wasn’t the failed strategy of COINTELPRO which had mired us ever deeper into a war that many in the upper ranks did not even think could be won; instead, it was the shit talk about Joe Biden and the criticism of Obama’s policies that was thrown around by McChrystal and his “crew.” I guess that’s America for you: the entire country gasping, “Oh no he ditnt!” when in fact, yes he did. Not long after the article was released the general resigned, and here we are, more than three years later, still up to our necks in the quagmire known as the “graveyard of empires,” Afghanistan.

When I saw that Michael Hastings had been killed in a car accident, my heart dropped. I always thought of him as one of the greats—his writing was sharp, and he obviously had balls of steel. America can’t afford to lose any more guys like that. Within minutes of his death, some people were calling it a government “hit.” While I am no fan of the government, and I know that they are completely capable of taking out a rogue journalist if they so choose, I still think the theorizing was a slap in the face to everything Hastings and his writing stood for. I don’t know of one self-respecting journalist who would defend saying such a thing before the first facts had come out about the crash. I understand that a lot of the conjecture was done by people who would not necessarily consider themselves journalists, but most of the comments I saw were indeed by people who would call themselves “critical thinkers.”

As for my own personal evolution, going from being asleep to awareness, I had a bumpy middle ground. There were times when my awakening could be compared to an all night coke-fueled paranoia fest, with way too much alcohol and too many trips down Psychosis Lane. I was sending myself into a depression with every theory I read. Today, I try to concentrate on the things I can prove they are fucking us with, like GMO’s, Big Pharma, drones, the war on drugs, corporate personhood, the military industrial complex, the prison industrial complex, NDAA and HR 347, just to name a few. I am now in a place where I try to look at all things with a skeptic’s eye, which includes the “theories.” As I said, I was not always like this—it took years to get here.

I believe the email that was sent out by Hastings was very real, the one where he basically confided to close friends and co-workers that he was working on a big story and felt he was being watched by the FBI. Sadly, this is not something that is out of the realm of possibility for any journalist. Read Dirty Wars and you will see that Jeremy Scahill was also being intimidated by someone who was more than likely part of a government goon agency. Shit, I bet you any journalist worth his or her salt has been stalked at least once. I would imagine that a journalist like Michael Hastings was always working on something that the powers-that-be could view as “a thorn in their side.” I don’t picture him covering the president’s golf outings.

Then, of course, there was the video that surfaced showing Michael’s car barreling down a straight road before exploding into flames. I have watched it several times, and while it looks like the car explodes while traveling on a straightaway, the car itself is out of view for a split second and it’s very hard for me to see anything, let alone if it does or doesn’t veer to the left. I have seen demos of cars being hacked. I know it’s possible to do, but knowing that it can be done and proving that it was are two completely different things. So, as far as the video goes, I can’t make an absolute judgment either way.

And, soon after the video, we have SSgt. Biggs, who claims he was a close friend of Hastings’. In some of his interviews, he said he had been in contact with Michael approximately three months prior to his death; in another, he says it was more like nine. SSgt. Biggs went on the Alex Jones show shortly after Hastings’ death, which I found somewhat curious. If you know anything about Hastings, then you know the last place you would have ever found him was on the Alex Jones show. Maybe SSgt. Biggs tried other outlets that were not interested. I don’t know, only he can answer that. But here is my BIG problem with Biggs: not one family member or friend has come forward to confirm anything he has said publicly, and that includes the rumor that Michael Hastings was cremated without the family’s consent. Even the woman who reported the story from LA said she could not get confirmation from the family that Michael was indeed returned in an urn. Now, I guess you could say the fact that the family has not denied SSgt. Biggs’ story is as good as a confirmation, but that would not be enough proof for most well respected journalists of Hastings’ caliber to even consider.

Lastly, there was Michael’s widow Elise Jordan’s interview with Piers Morgan. I had been waiting for her to speak for weeks. I had recently been asked by a reporter from Vice what I thought about Hastings’ death. My exact response was, “I am waiting to see what Elise has to say.” Well, the next day she spoke, and while at first I thought it bizarre that she had chosen Morgan’s show to do her first interview, I have since learned that both Michael and Elise had done his show several times over the years. When asked what she thought of the crash, she said she believed it was a tragic accident. Only Elise Jordan can say whether or not that is her true belief. I will not presume to know what is going on in her head.

So, after spending the weekend knee-deep in all things Michael Hastings, I still believe that questioning is a good thing, especially when there are some very large red flags blowing in the breeze. But I unequivocally believe that being a critical thinker requires you to look at the circumstances from all angles, and especially to challenge your own “beliefs.” Prior to writing this, I was definitely leaning one way more than the other. Which way, you ask? I will never tell. My opinions and conjecture don’t really matter anyway. What should matter is good, solid fact. Can I say beyond a reasonable doubt that Michael Hastings wasn’t murdered? Fuck no. But can I say he was?

Update: Shortly after this essay was written, veteran journalist Russ Baker spoke with a member of the Hastings family, confirming that they did in fact request that Hastings’ body be cremated. Challenge EVERYTHING, including your own beliefs. 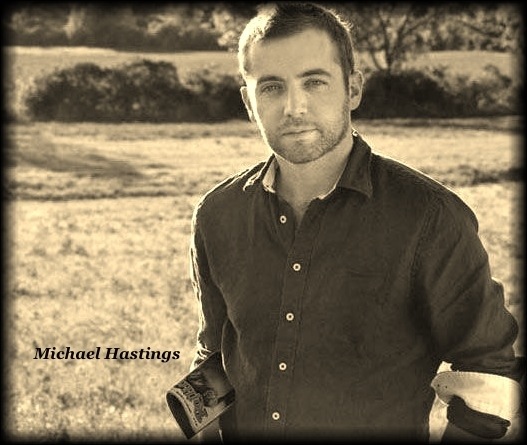 Cynthia is also a satellite producer for the radio show Dangerous Conversation which can be heard on radioio.com.

10 thoughts on “Ask Me Anything You Want; Just Don’t Ask Me what I Think Happened to Michael Hastings”