Today, on what would have been his 76th birthday, I wanted to post something about my favorite journalist/author, Hunter Stockton Thompson. But as I thought about what to write, it occurred to me that nothing I could ever put down on “paper” could do justice to the Good Doctor. So instead, I decided to let him speak for himself and publish a few of my favorite quotations from Thompson’s articles, books, letters and interviews, that, for one reason or another, have meant something to me (or just made me smile) at some point in my life, as well as a few photos and videos.~NDA

“I understand that fear is my friend, but not always. Never turn your back on fear. It should always be in front of you, like a thing that might have to be killed.” – Kingdom of Fear

“It was the Law of the Sea, they said. Civilization ends at the waterline. Beyond that, we all enter the food chain, and not always right at the top.”
– Generation of Swine

“America…just a nation of two hundred million used car salesmen with all the money we need to buy guns and no qualms about killing anybody else in the world who tries to make us uncomfortable.”

Salon: But speaking of rules, you’ve been arrested dozens of times in your life. Specific incidents aside, what’s common to these run-ins? Where do you stand vis-à-vis the law?
Thompson: “Goddammit. Yeah, I have. First, there’s a huge difference between being arrested and being guilty. Second, see, the law changes and I don’t. How I stand vis-à-vis the law at any given moment depends on the law. The law can change from state to state, from nation to nation, from city to city. I guess I have to go by a higher law. How’s that? Yeah, I consider myself a road man for the lords of karma.” – 2003

“We had two bags of grass, seventy-five pellets of mescaline, five sheets of high-powered blotter acid, a salt shaker half-full of cocaine and a whole galaxy of multicolored uppers, downers, screamers, laughers… also a quart of tequila, a quart of rum, a case of Budweiser, a pint of raw ether, and two dozen amyls. But the only thing that worried me was the ether. There is nothing more irresponsible and depraved than a man in the depths of an ether binge, and I knew we would be getting into that rotten stuff sooner or later.” – Fear and Loathing in Las Vegas

“For every moment of triumph, for every instance of beauty, many souls must be trampled.”

“We are all alone, born alone, die alone, and — in spite of True Romance magazines — we shall all someday look back on our lives and see that, in spite of our company, we were alone the whole way. I do not say lonely — at least, not all the time — but essentially, and finally, alone. This is what makes your self-respect so important, and I don’t see how you can respect yourself if you must look in the hearts and minds of others for your happiness.”
– The Proud Highway: Saga of a Desperate Southern Gentleman

“The towers are gone now, reduced to bloody rubble, along with all hopes for Peace in Our Time, in the United States or any other country. Make no mistake about it: We are At War now — with somebody — and we will stay At War with that mysterious Enemy for the rest of our lives. It will be guerilla warfare on a global scale, with no front lines and no identifiable enemy… We are going to punish somebody for this attack, but just who or what will be blown to smithereens for it is hard to say. Maybe Afghanistan, maybe Pakistan or Iraq, or possibly all three at once. Who knows?”
– Kingdom of Fear, 12 September 2001

“Jesus! How much more of this cheap-jack bullshit can we be expected to take from that stupid little gunsel? Who gives a fuck if he’s lonely and depressed down there in San Clemente? If there were any such thing as true justice in this world, his rancid carcass would be somewhere down around Easter Island right now, in the belly of a hammerhead shark.”
-Rolling Stone, Reacting to a Washington Post article on Nixon’s life after resignation.

“I have never felt comfortable around people who talk about their feelings for Jesus, or any other deity for that matter, because they are usually none too bright… Or maybe “stupid” is a better way of saying it; but I have never seen much point in getting heavy with either stupid people or Jesus freaks, just as long as they don’t bother me. In a world as weird and cruel as this one we have made for ourselves, I figure anybody who can find peace and personal happiness without ripping off somebody else deserves to be left alone. They will not inherit the earth, but then neither will I… And I have learned to live, as it were, with the idea that I will never find peace and happiness, either. But as long as I know there’s a pretty good chance I can get my hands on either one of them every once in a while, I do the best I can between high spots.” -Rolling Stone, ’76

“The kids are turned off from politics, they say. Most of ’em don’t even want to hear about it. All they want to do these days is lie around on waterbeds and smoke that goddamn marrywanna… yeah, and just between you and me Fred thats probably all for the best.” – Fear and Loathing: On the Campaign Trail ’72

“There is a huge body of evidence to support the notion that me and the police were put on this earth to do extremely different things and never to mingle professionally with each other, except at official functions, when we all wear ties and drink heavily and whoop it up like the natural, good-humored wild boys that we know in our hearts that we are..These occasions are rare, but they happen — despite the forked tongue of fate that has put us forever on different paths.” – Fear and Loathing in Elko

“We are turning into a nation of whimpering slaves to Fear – fear of war, fear of poverty, fear of random terrorism, fear of getting down-sized or fired because of the plunging economy, fear of getting evicted for bad debts, or suddenly getting locked up in a military detention camp on vague charges of being a Terrorist sympathizer.”
– Extreme Behavior in Aspen. 2003.

“Not everybody is comfortable with the idea that politics is a guilty addiction. But it is. They are addicts, and they are guilty and they do lie and cheat and steal — like all junkies. And when they get in a frenzy, they will sacrifice anything and anybody to feed their cruel and stupid habit, and there is no cure for it. That is addictive thinking. That is politics — especially in presidential campaigns. That is when the addicts seize the high ground. They care about nothing else. They are salmon, and they must spawn. They are addicts.” – Better Than Sex

“All political power comes from the barrel of either guns, pussy, or opium pipes, and people seem to like it that way.” – Kingdom of Fear 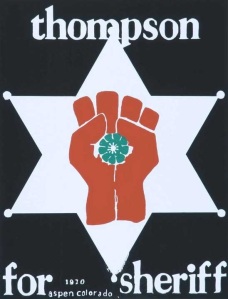 “In a nation run by swine, all pigs are upward-mobile and the rest of us are fucked until we can put our acts together: Not necessarily to Win, but mainly to keep from Losing Completely.” – Gonzo Papers, Vol. 1: The Great Shark Hunt: Strange Tales from a Strange Time

“There are times, however, and this is one of them, when even being right feels wrong. What do you say, for instance, about a generation that has been taught that rain is poison and sex is death? If making love might be fatal and if a cool spring breeze on any summer afternoon can turn a crystal blue lake into a puddle of black poison right in front of your eyes, there is not much left except TV and relentless masturbation. It’s a strange world. Some people get rich and others eat shit and die.”
– Generation of Swine: Tales of Shame and Degradation in the ’80s.

“Maybe there is no Heaven. Or maybe this is all pure gibberish—a product of the demented imagination of a lazy drunken hillbilly with a heart full of hate who has found a way to live out where the real winds blow—to sleep late, have fun, get wild, drink whisky, and drive fast on empty streets with nothing in mind except falling in love and not getting arrested . . . Res ipsa loquitur. Let the good times roll.”
– Generation of Swine: Tales of Shame and Degradation in the ’80’s

“There is at this moment a beetle the size of god’s ass on the table about six inches from the t-writer. It is worse than anything Kafka ever dreamed, so big I can see its eyes and the hair on its legs — jesus, suddenly it leaped off and now circles me with a menacing whir.”
Letter to Paul Semonin. 1962.

“Walk tall, kick ass, learn to speak Arabic, love music and never forget you come from a long line of truth seekers, lovers and warriors.” – Note to his grandson, Will.

“We were angry and righteous in those days, and there were millions of us. We kicked two chief executives out because they were stupid warmongers. We conquered Lyndon Johnson and we stomped on Richard Nixon – which wise people said was impossible, but so what? It was fun. We were warriors then, and our tribe was strong like a river. That river is still running. All we have to do is get out and vote, while it’s still legal, and we will wash those crooked warmongers out of the White House.” 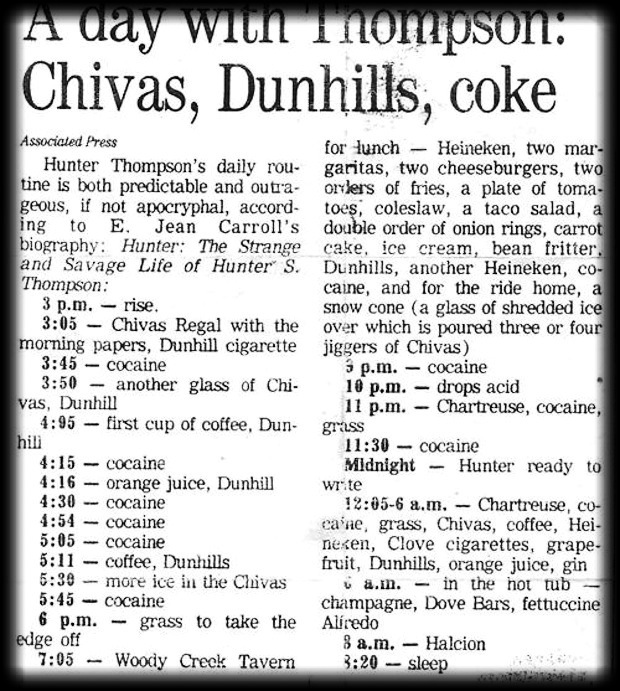 “Some may never live, but the crazy never die.”

Buy the ticket, take the ride.