“Lightning seems to have lost its menace. Compared to what is going on on earth today, heaven’s firebrands are penny fireworks with wet fuses.” ~ EB White, One Man’s Meat

by Willie B. Lakey

Eight hundred left turns. Sounds simple enough, although we know otherwise. I have no idea how many left turns I’ve made over the past 40-odd years, but none were at speeds in the upper-100 mph range steering an open-wheeled racer with 32 other drivers trying to put me into a wall, then flooring it for exactly 3.1 seconds to speeds over 200 mph before braking and making another hard left.

The Indy 500 is on the horizon, in case you didn’t understand the sports reference to this Chaos Sports update. My memories of this race are mainly from listening to it on the radio, which is my favorite way to take in an auto race. Unless I’m working a beer stand at the event—then my favorite way is live and in person, selling beer to the gathered masses.

Don’t get me wrong; my object is not to lump race fans into a catch-all Southern redneck, beer-drinkin’ NASCAR-style demographic. I represent at least two, maybe three of those groups, everything but being a NASCAR fan more or less. Where were we?

Oh yeah. Back in the day there were more familiar names on the INDY circuit than today. AJ Foyt had a car dealership just a few miles from my house when I was a kid. A few buddies and I would ride our bikes there at times, just hoping to see the legend. One time we did, and if that doesn’t make me an Indy car fan, then I don’t know what does.

Unfamiliar Faces Spin Out and Wreck With Tornado Coverage

Flipping through the channels looking for a baseball game Monday afternoon, live coverage of the tornado south of Oklahoma City came on the small screen. About five minutes into that, there really was no need to see more.

But more I did see in the next few hours, and a lot of it was your typical garbage with news crews stepping on each other to get in the first report of a kill. Early on, the only gore was a bunch of horses at some farm directly in the path of this incredible work of Mother Nature. It was difficult not to hope that the death count would diminish while the number of wounded journalists who simply got in the way increased.

Of course, I apply the word ‘journalist’ here rather loosely.

Melvin Kaminsky, Now There Was A True Journalist

Along with tornado coverage, and just to get away from the norm, baseball took a backseat to my television viewing on Monday. PBS, one of the few channels I still follow on the ass end of the remote, carried a great program about Melvin Kaminsky. You may know him as Mel Brooks.

Whatever his name, I think of him as a true God, with a capital-G. Brooks played as much a role in my discovering things weren’t always as they seemed as anyone else, perhaps due in part to me simply coming of age when some of this satires were first being shown. More of a journalist in many ways than members of today’s Fourth Estate, the only problem with Brooks was holding up his mirror for society to see itself well after the fact.

There was no mention of tornadoes during the PBS broadcast, but I feel as if I learned more about them and other meteorological events anyway watching the program about Mel Brooks. And I’d certainly like to see his take on how today’s media responds to such a crisis.

One familiar name is on the front row for this year’s Indy 500: Marco Andretti, son of Michael and grandson of Mario. If a stream of the radio call is available, I will root for the Andretti kid while listening to the race. Win or lose, milk will be part of my post-race celebration.
Well…cream along with vodka and Kahlua, and maybe drink the milk on top of my morning bowl of Grape Nuts.

Author: A crotchety old man since his birth during Gen. Eisenhower’s first term as US president, Willie B. Lakey resides in the bee-yoo-tiful Texas Hill Country along with his wife, too many cats and his beloved beer fridge. Employed as an overworked and underpaid freelance sportswriter, his few moments of happiness usually come when communing with critters, tending his garden or sippin’ cold beer and enjoying tunes at Gruene Hall. 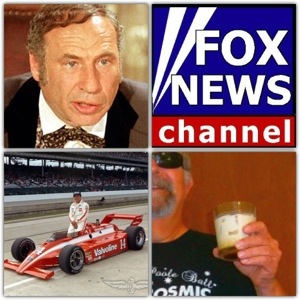