“Man is kind enough when he is not excited by religion.” ~ Mark Twain

“If you are really bothered by gay people getting married, you’re an asshole. End of fucking story.”
~ Joe Rogan

I served as a squad leader in the U.S. Army Infantry, including a combat tour during the early stages of the Iraq War. Whenever a well-intentioned person tells me something along the lines of, “Thank you for fighting for our freedom,” I generally just smile and politely say, “No problem.” Although, to be quite honest, I don’t really believe that what we did in Iraq had a lot to do with protecting American freedoms. American interests, perhaps, but not freedoms. But if it did, then one of the freedoms that I would be proud to fight for would be the freedom of people to live their personal lives as they wish, free of interference from the government and others, so long as they aren’t harming another individual, damaging someone else’s property or infringing on another’s rights.

Traditional marriage… I’ve always found that to be an interesting phrase, especially when used in reference to the ongoing debate over gay rights. It is usually thrown around by seemingly angry, self-identified Evangelical Republicans who have been told by religious leaders, politicians and conservative pundits that they should feel “outraged” over certain social issues. I should point out that this is not an indictment of all those who label themselves as Republicans. Or Christians. I know that many people who try to follow the teachings of Jesus just enjoy the message of love, charity and forgiveness. But whatever. I personally choose to avoid labels of any kind, whenever possible, and just try to be a good person.

But without question, at least in this country, those who are constantly up in arms over the possibility of two men or two women being allowed to marry each other generally identify as Christians. And they would have us believe that the institution of marriage would completely fall apart, chaos would ensue, the streets would burn and the sweet little children would be assaulted daily with images of hardcore gay pornography in their public schools. Or something to that effect….

My wife and I have been happily married for ten years. If the lesbians down the street want to fuck each other in the privacy of their own home, why should I care? And if they want to get married so that they can receive the same benefits (taxes, medical, insurance, etc) as my wife and I… again, why should I care? Gay marriage poses absolutely no threat to our relationship or our family and has no impact on our lives… or yours.

Two dudes or chicks getting hitched to each other just isn’t going to hurt you. At all. So can we please stop the feigned outrage over what people choose to do with their personal lives? The whole argument is nothing more than a completely unnecessary distraction from some very real issues we face as a nation.

Leviticus: A Shining Example of Morality

On what, exactly, are we basing this definition of traditional marriage? The Bible? Women in the Bible were considered inferior and were often beaten, raped or worse. Wives were generally considered to be property, expected to stay silent and obedient. Is that the traditional Christian marriage we want?

If you are still, somehow, holding on to the idea that marriage is some type of pure, biblical “tradition” that must never be “tainted” by people who are different from you, I think you need to realize that the “tradition” you are speaking of is yours alone. And that is perfectly fine. Please, by all means, continue to practice the traditions of your marriage. Just don’t expect everyone else to conform to your views and beliefs. You wouldn’t like it if someone stepped in and told you that you weren’t allowed to marry the person you love because they somehow found it disagreeable with their own personal religious or societal views.

In short, if it isn’t hurting anybody, don’t fucking worry about it. Or, as Jesus allegedly put it: “Do unto others as you would have them do unto you.”

And if Jesus himself isn’t traditional enough for you, maybe a passage from the Old Testament will be more to your liking: Leviticus 19:18 “Do not seek revenge or bear a grudge against one of your people, but love your neighbor as yourself.”

Of course, most fundamentalist Christians will be familiar with Leviticus as it is the same book that gives us the verse against homosexuality that “traditional marriage” advocates enjoy quoting so often. Leviticus 18:22 Thou shalt not lie with mankind, as with womankind: it is an abomination.

Okay, fair enough. But, if you are in favor of making the book of Leviticus the moral guide to tradition, it’s important that you follow all of the rules and “abominations” written there, not just the ones that support your current obsession (and yes, it is an obsession) with homosexuality:

•Preachers’ daughters who sleep around before marriage must be burned to death. (Leviticus 21:9)

•Don’t wear clothes made of two different kinds of material, like that cotton/polyester blend shirt you have on right now, knucklehead. (Lev 19:19) and of course,

•If you’ve ever lost your temper and said the word, “Goddamnit,” I’m afraid the whole town must now get together and beat you with rocks until you’re dead. (Lev 24:16)

“So do what I say. Do not do any of these sinful things that were done before you. Do not make yourselves sin by doing them. For I am the Lord your GOD!” Leviticus 18:30

Also, never forget that God loves the smell of burning cattle (who doesn’t, really?) on an altar (Lev 1:9) and that menstruating women are unclean and sinful. (Lev 15:19-30)

And for the love of Horus, don’t get a tattoo! (Lev 19:28) Even if it’s a bible verse or a picture of a cross or the beautiful blond-haired, blue-eyed face of a magical, middle-eastern Jew. That will get you sentenced to eternal damnation as well. Of course there are countless other “abominations” listed in the good book, but who has time to actually read (let alone follow) all this shit? Obviously most Christians don’t.

So take the anti-gay Leviticus Bible verse for what it’s worth, considering the source. Personally, I’ve never put too much stock in following Christian “traditions.” I guess that I’m just not that comfortable with burning and stoning people to death.

And as far as the politicians and preachers go who continually push this anti-gay rhetoric – no matter how often they speak of their love for American or Christian values – they are bigots, plain and simple. And bigotry wrapped in the flag and shielded by a Bible is still bigotry, no matter how you try to spin it.

In closing, I’ll admit that there is one potentialy valid argument against legalizing gay marriage: the argument that the government has absolutely no business regulating marriage or personal relationships, of any kind, between consenting adults of any sexual orientation, period. But that’s a different conversation for another day.

→ If you’d like to read something by somebody much more qualified than myself on the topic of traditional marriage, might I suggest this article by Dr. Christopher Ryan? Dr. Ryan, Ph.D. is an expert on the prehistoric roots of human sexuality and the coauthor of the New York Times bestselling science book, Sex at Dawn. Fundamentalist Christians will be particularly fond of this book. Buy it today!


Author: Nick Allison is just a banged-up Army Infantry veteran of the War in Iraq. He lives in Austin, TX with his wife, their children and two big, dumb, ugly mongrel dogs. Don’t take anything he says too seriously… he’s just trying to figure out this ride we call existence like everyone else. Also, he enjoys writing his own bio in third-person because it probably makes him feel more important. 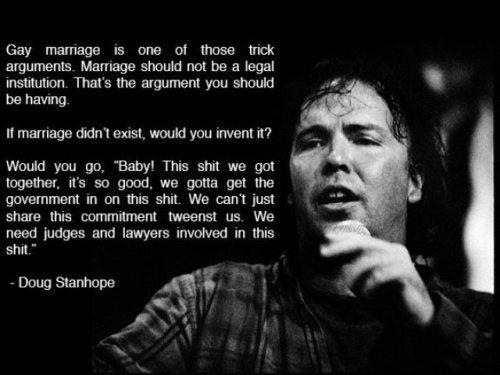 5 thoughts on “The Ridiculous Biblical Argument for “Traditional” Marriage”