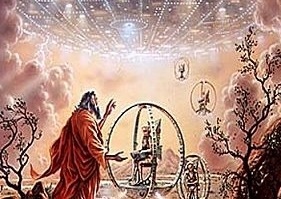 Time for some fun with biblical interpretation!

The Bible is a weird, psychedelic collection of books. Take for example Ezekiel Chapter 1, Verses 4-24. Is the author employing a parable/analogy to describe some event of great importance? Is he using the limited vocabulary of his time to describe an extraterrestrial spaceship that is landing in the desert? Or was he just experiencing the effect of a particularly potent, psychedelic plant/mushroom like so many of the early Christians and Gnostics to conjure up visions of the gods? According to my own “scientific research,” I’m leaning toward the psychedelic trip theory. Either way, it’s pretty interesting stuff. For those of you who don’t have the book of Ezekiel memorized front to back, have a read!

4 I looked, and I saw a windstorm coming out of the north—an immense cloud with flashing lightning and surrounded by brilliant light. The center of the fire looked like glowing metal, 5 and in the fire was what looked like four living creatures. In appearance their form was human, 6 but each of them had four faces and four wings. 7 Their legs were straight; their feet were like those of a calf and gleamed like burnished bronze. 8 Under their wings on their four sides they had human hands. All four of them had faces and wings, 9 and the wings of one touched the wings of another. Each one went straight ahead; they did not turn as they moved.

10 Their faces looked like this: Each of the four had the face of a human being, and on the right side each had the face of a lion, and on the left the face of an ox; each also had the face of an eagle. 11 Such were their faces. They each had two wings spreading out upward, each wing touching that of the creature on either side; and each had two other wings covering its body. 12 Each one went straight ahead. Wherever the spirit would go, they would go, without turning as they went. 13 The appearance of the living creatures was like burning coals of fire or like torches. Fire moved back and forth among the creatures; it was bright, and lightning flashed out of it. 14 The creatures sped back and forth like flashes of lightning.

15 As I looked at the living creatures, I saw a wheel on the ground beside each creature with its four faces. 16 This was the appearance and structure of the wheels: They sparkled like topaz, and all four looked alike. Each appeared to be made like a wheel intersecting a wheel. 17 As they moved, they would go in any one of the four directions the creatures faced; the wheels did not change direction as the creatures went. 18 Their rims were high and awesome, and all four rims were full of eyes all around.

22 Spread out above the heads of the living creatures was what looked something like a vault, sparkling like crystal, and awesome. 23 Under the vault their wings were stretched out one toward the other, and each had two wings covering its body. 24 When the creatures moved, I heard the sound of their wings, like the roar of rushing waters, like the voice of the Almighty,[b] like the tumult of an army. When they stood still, they lowered their wings.

Pretty trippy, huh? Strange, human like creatures descending from the sky, impossible synchronized movements, blinding lights, strange noises, metallic disks, a shining “vault” or perhaps mothership above them… is this the bible or a local newscast in a small, southern town describing the weekly alien abduction?

As I said earlier, I lean toward the plant/mushroom induced psychedelic trip. Or maybe a particularly vivid dream. But maybe, just maybe, Giorgio A. Tsoukalos is correct and we’ve been in contact with a higher intergalactic intelligence since our origins. This would certainly help to explain our species’ obsession with gods and angels and heavens in the sky.

It’s fun to ponder and discuss- just don’t expect it to be discussed at your local place of worship this Sunday. It’s one of the many parts of the good book that seems, for now at least, to be left out of the conversation.

About the Author: Nick Allison is just a banged-up combat infantry veteran of the War in Iraq. He lives in Austin, TX with his wife, their children and two big, dumb, ugly mongrel dogs. 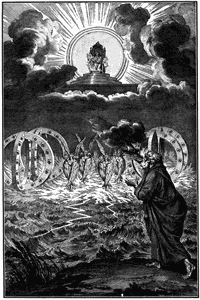