Are you worried about speech that promotes ideas you don’t like? Does it bother you when someone is sharing an unpopular, minority, or ‘radical’ opinion? In the information age, there’s just so much speech! Here are some quotes about speech issues which may be worth consideration:

“But, above all else, the First Amendment means that government has no power to restrict expression because of its message, its ideas, its subject matter, or its content.”

“Since knowledge, thinking, and rational action are properties of the individual, since the choice to exercise his rational faculty or not depends on the individual, man’s survival requires that those who think be free of the interference of those who don’t. Since men are neither omniscient nor infallible, they must be free to agree or disagree, to cooperate or to pursue their own independent course, each according to his own rational judgment. Freedom is the fundamental requirement of man’s mind.

A rational mind does not work under compulsion; it does not subordinate its grasp of reality to anyone’s orders, directives, or controls; it does not sacrifice its knowledge, its view of the truth, to anyone’s opinions, threats, wishes, plans, or “welfare”. Such a mind may be hampered by others, it may be silenced, proscribed, imprisoned, or destroyed; it cannot be forced; a gun is not an argument.

It is from the work and the inviolate integrity of such minds—from the intransigent innovators—that all of mankind’s knowledge and achievements have come. It is to such minds that mankind owes its survival.”

I have to admit that I’ve cursed at the television or YouTube video when someone has said something I perceived to be false or ignorant at times. I’m sure I’ve even been guilty of saying things like, ‘he shouldn’t have said that.’ I would even go so far as to say that I’ve wished some political pundits would just quit talking and pursue another line of work. But, when I back up and take a second (hopefully more objective) look, I see the value of and rationale in allowing free speech and expression to flow unobstructed. As Brandeis so eloquently explains; the remedy for speech you don’t endorse is not to use force in shutting it down, but to use more freedom of speech to expose and rebut. Maybe this is something we should think about when pondering the activities of persons such as Wiki Leaks founder Julian Assange, imprisoned whistle-blower Bradley Manning, and the maker of the recent controversial YouTube movie trailer ‘The Innocence of Muslims” Nakoula Basseley Nakoula – a.k.a. Sam Bacile. As we watch the American presidential race head into it’s final month for 2012, there may very well be those who would love to shut the blathering pie-holes of Mitt Romney, Barack Obama, Gary Johnson, or any other candidates. There’s never a shortage of speech going on with which you can find to disagree.

Many who cherish and actively seek to protect free speech see the importance of defending the Right of others to say things with which one vehemently disagrees. Censorship is truly the tool of tyrants. It almost begs the question as to whether there should always be at least one dissenting voice in every crowd just to remind us of the principle. Consensus is great, but not when enforced against the individual who refuses to yield to the majority opinion. Here’s some poetic food for thought relating to the topic:

I was there for the birth of good and evil,

present when someone thought different.

I was there when god created man,

and when the first atheist claimed faith insufficient.

I was born with man and woman,

and live in the war of the sexes.

I’m there when one takes their own life,

and when protestors stop and start presses.

and set free souls who are entangled inextricably.

Yes-men despise me because I’m closer to “no.”

I was left hanging around during the Spanish Inquisition,

by people who claimed to revere me.

I’ve been in the back of every martyr’s mind,

and been a motivator to every revolutionary.

I am celebrated by liberators when an empire crumbles,

but ridiculed when a conscientious objector.

Love and hate have both claimed me as friend,

and I’m my own worst enemy when presented as censor.

and for the divorce.

You wouldn’t be who you are without me,

Resistance is never futile for me.

Give me liberty, or give me death.

It’s difficult to govern without consent,

and I’d defend free speech with my dying breath.

I’m the brave and stupid loner

in the face of all the statist “isms.”

I unite those in disagreement

in a common purpose of individuality.

If you don’t share my opinion, you make my point.

You hear me when the lawyers object,

and when others object to lawyers.

You see me any time someone fights back,

or any living being refuses to wear a collar.

I can be an honest liar,

I can kill when duty calls.

But, think before you seek my eradication;

Without me, you have no voice at all.

I’ve learned not to get so upset as I used to when someone expresses themselves in ways which rub me the wrong. Instead, I’m seeking to rather appreciate my own ability to speak what I think is the appropriate response or correction. For those who become irritated or even scared of speech which seems somehow fringe, I say don’t worry about it so much. So, next time you see a protestor with a sign or read an article with which you disagree; remember that that person’s Right to speech you don’t like is your equal Right to disagree. It would seem to me much better that people exchange rhetoric than physical blows. Free speech therefore, is another means by which we actually secure the peace.

No, I’m not so scared of the secret information governments want to hide getting out. I’m not scared of ‘inflammatory’ religious videos being seen by reactionaries. I’ll tell you when is the day to be scared of speech; the day to fear what is happening with free speech is the day when disaffected teenagers who self-describe as anarchists run around town spray painting graffiti on police cruisers, government buildings, and public areas with pro-government tags; “Trust Your Government” on the side of City Hall, “Obey Authority” on the windows of the Court House, “Defer to the Police” on law enforcement vehicles, and “Pay Your Taxes” on public sidewalks. Yes, my friend – that’s the day I’d be worried.

About the Author: A. G. House is a former licensed minister of the United Pentecostal Church International and a veteran of the war in Afghanistan. He is a “christian soldier” who has renounced faith in any religions, governments or other institutions of manipulation, coercion and control. 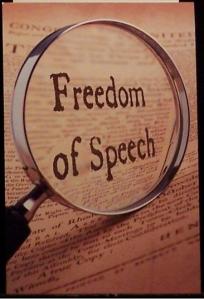